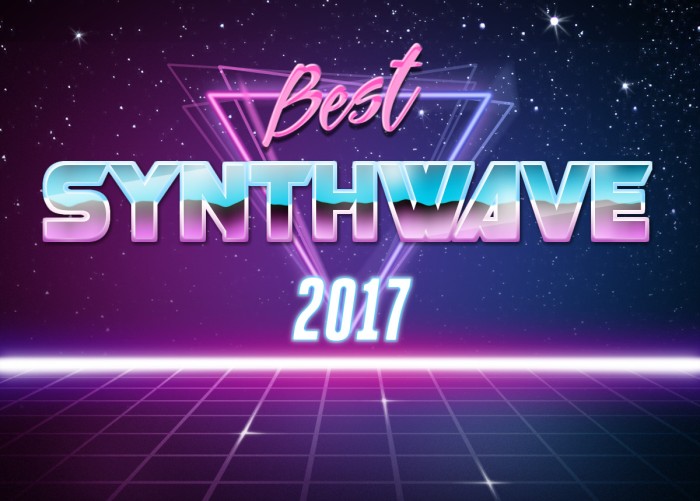 Happy Holidays! To celebrate the end of the year, I’ve asked some of my fellow synthwave producers to stop by and share their favorite releases of 2017. What you’ll see is a diverse cross-range of what the genre has to offer, from surprise new albums from beloved and well-established artists, to dynamic debuts from up-and-coming producers. -G

I did a bit of thinking before I could make a statement like “Best Synthwave Album of 2017”, but in truth, the decision is pretty easy.

I ran into Retroglyphs on Twitter in February 2017, when they were just 3 months old. On first listen, I was impressed that they were a real band, and that they had really captured that 80’s pop sound VERY well. It wasn’t until later, in August when they put out their first album, the eponymous “Retroglyphs” that I heard “One More Kiss” and I was hooked. Preceded by “Wild Road”, I was very excited to hear what the rest of the album was going to bring me. What follows is well thought out rollercoaster of emotions and sounds. Starting out pepped up and happy, the album takes a turn for the dark, sadder side of things, and even dips in some angry, frustrated tirades. And each song starts with a hook you’ll be singing to yourself for the rest of the day. This is a truly solid album that I’ve listened to on repeat many times since August.

I really look forward to seeing where these guys go with their sound, and I sure as heck hope I can share a stage with them some day.

Traveling through the dimensions of space, time and speakers, an entity known as Droid Bishop created a world of pure unadulterated joy for lovers of all things synthesizer years ago. The depth, maturity and complex nature of Droid’s melodic and ornate output created a deep sense of respect and admiration for those in the then burgeoning synthwave community. The emotive nature of each chord progression through an arpeggiated wonderland of twists and turns in each track coupled with welcoming warm pads, impressive percussion and dynamic changes and bridges immediately display a proficient producer who manages to effectively draw on the sensibilities with such a retro yet completely modern vibe. His understanding of song structuring and inspiration is impressive and deep, as each track yields such a unique identity and feel. And let’s face it, Droid Bishop has to be the best synth based moniker in recent times.

Droid Bishop’s Lost In Symmetry is a shining example of this powerhouse producer’s work. Delving into uncharted terrain with complexities and moods which garner the strongest of feels and emotions radiate through the release. From slower ballad type compositions to his signature driving synthwave, the journey in sound is remarkable and is without a doubt the strongest and most lasting release of the year. Do yourself a favor and add this wondrous work of art to your stereo collection. Whether you are serenading a loved one, impressing a friend for the first time, or driving the streets at night feeling invincible and vulnerable, the release has it all. 10/10

Starting off the album with Behemoth IV sets the tone for the album and it doesn’t let up. This has been in heavy rotation for me since it’s release.

Picking a favorite synth record for 2017 is tough, because there are a few I’ve really enjoyed. But in the end, 2017 was the year we got a new FM Attack album.

Stellar is an evolution of the sound FM Attack developed on Deja Vu and Dreamatic. While FM Attack has always incorporated diverse influences, from post punk to house, Stellar takes another step away from the core tropes of synthwave. It is especially notable for its use of guitar as texture, as well as its decidedly introspective tone. But in the end, the warm vintage synth tones still take center stage.

This one’s a slow burner–an album that gets better with every listen. If you want synthwave that pushes boundaries, this is a good place to start.

Check out The G’s latest, Cosmopolis!

The first thing that grabbed me about Michael Oakley’s new album California is how “easy” the music and vocals sound together–as though no effort was needed to make it sound so naturally perfect. It’s the kind of music that, as a music producer, I hate to listen to because it makes me question my own skills as an artist. Having said that, I can’t stop listening to this album.

This is what happens when a music producer is not only a talented musician but a damngood singer as well. You get the essence of the artist in each track. A complete expression of their nostalgic look back on their teenage self. This album brought me back to lying on the grass with my walkman on and staring at the sky, driving my first car on the highway and feeling that spike in my heart when I would hold a girl’s hand for the first time.

California is pure nostalgic emotion. My only complaint is that there aren’t enough songs. I feel like the lights have been turned on at the dance and I don’t want to go home yet.

Check out Computronic’s latest, Even the Score!

When I first listened to “Crystalline”, it just made sense to me. From the shakers mimicking a train pulling into the station to the crystal neon rain droplets cascading throughout the song, it just all made sense. The whole album makes sense.

Nocturnal is a very well-produced audio journey into neo-noir streets–and there is honesty in the writing that is felt. My two favorite tracks from the album are “Shadows” and “Light Years” (feat. The wonderful Nikki Flores). “Shadows” is a driving composition, complimented by a story of the darkness that resides within us that could rear its ugly head at any moment. There is a deep truth and understanding to this that I feel I can relate to. Being human, we can all make regrettable mistakes that will follow us forever like shadows underneath. “Light Years” offers us some solace in its melancholic arms telling us it will be ok, that eventually we will find that feeling lost long ago.

Nocturnal is a masterpiece of a Synthwave album and is powered by this nostalgia of feelings long lost or artificially created in memories. It will immerse you in its warm synths and addicting saxophone, so thoughtfully played by Thomas Edinger (it really does tie all the tracks together well, weaving its way in and out of them like some neon lit serpent). The lyrics and sincere tone of voice will stir your emotions and bring them out into the open. Get lost in this beautiful music and let it inspire you.

My favorite album of the year is pretty tough to nail down, as The Midnight and Perturbator were strong entries for the genre of synth to the wave. BUT…out of left field, my favorite album was Pantropic by Hello Meteor. From the very first note to the last, it’s a master class in music, from amazing sweeping melodies, deep soundtrack vibes, and some of the overall best vibes out there. I’ve never listened to a record that described my experiences with each track. I mean, alot of what makes the album amazing is that every song is like a really good memory, and it really makes you feel. Honorable mentions to Skeleton Beach, and The Crusader.

One thought on “Synthwave Artists Pick Their Top Releases of 2017”